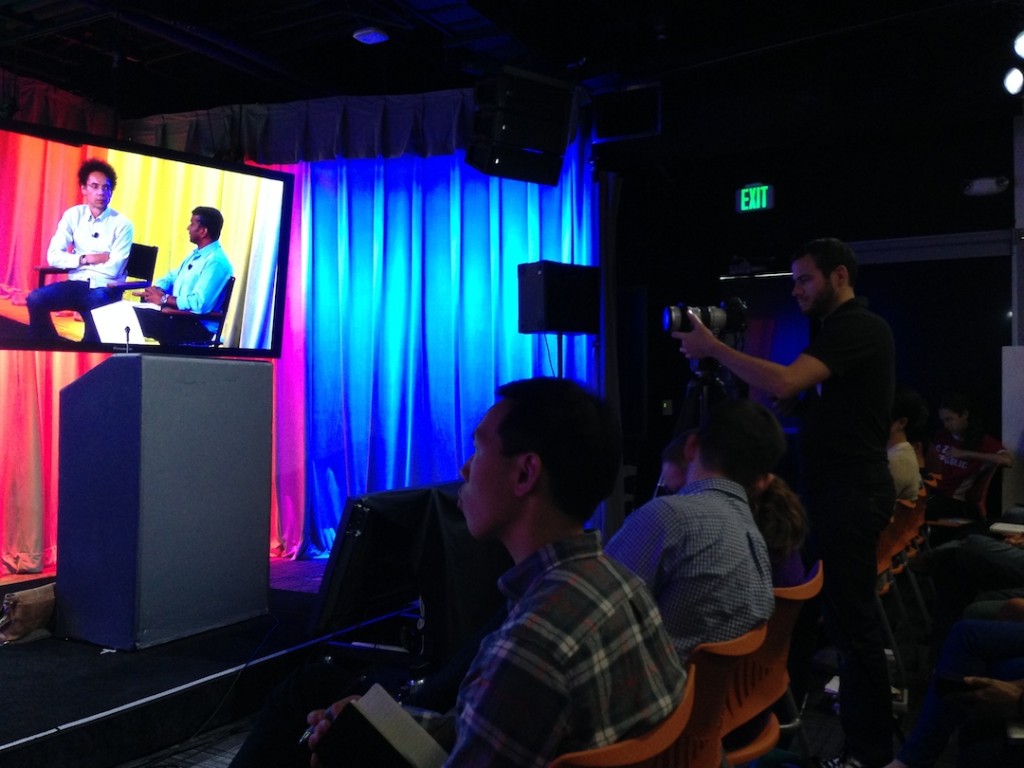 How To Shoot at Google

We’re been at Google quite a bit of late. Neil Gaiman, Malcolm Gladwell, Professor Richard Dawkins to namedrop a few. Interested in knowing how we shoot at Google? We start with a great team.

We walk in the door between 2 hours to an hour and a half before the event is to start. Audio gear comes in first. While many locations at Google have internal A/V gear for GVC (Google Video Conference), we are self contained. Video, Audio and PA.

For audio we bring in a Mackie 1604-VL2 Pro field mixer, full compliment of RF stick and lav mics (we give the guests a choice) and speaker cabinets sized to fit the audio needs of the room. We capture to a Zoom H4N recorder as primary and a hard drive as backup.

For video, the standard complement is 2 Canon 5D Mk II or 7D cameras. We’ve used as many as 5 cameras on a shoot. This Mayday shoot used 4. Lens used depend quite a bit on what we’re shooting.

While we don’t use GVC gear, we do feed the GVC system our audio. We then point one of the in-house  PTZ ceiling cameras so that Googlers around the world can watch.

After the shoot, everything is dumped into Final Cut Pro 7 and pieced together in multi-camera mode. We add color correction, opening and closing graphics and music. We also put together a montage at the end of each video using b-roll we shoot following the main event. Hand shaking, book signing, person photo taking.

The finished media is compressed from Apple Pro Res to h.246 and sent via Dropbox for approval. From there it’s uploaded to YouTube as a private movie for another round of approval. And then it goes live on the At Google Talks webpage.

And yes, our collection of autographed books is growing.