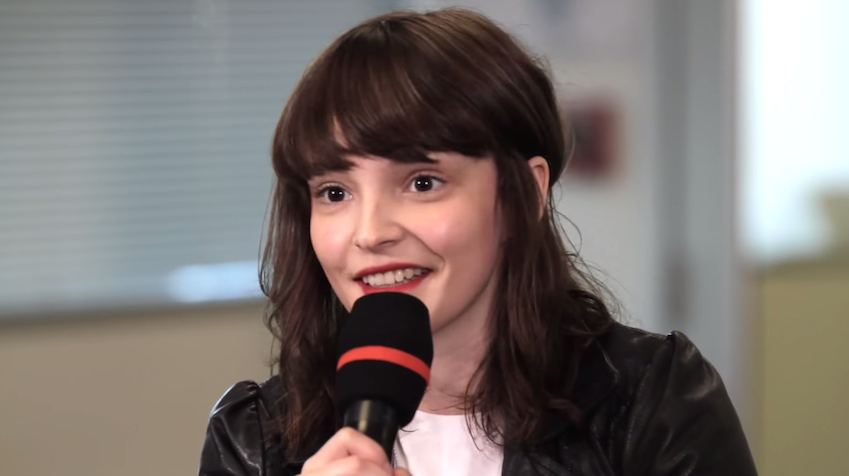 CHVRCHES performance at Google was one of our favorite shoots.

And full of challenges. Most shoots at Google have some challenge to them, usually because of the rooms these events take place in. The room we were assigned this time was long and skinny. The “audience” of about 8 rows deep and 60 rows wide face large windows and two projector screens. The front row being only about 8 feet from the wall it faces. While this works great for what the room was designed for, as a concert venue…not the best. Both visually and for an audience to watch a CHVRCHES performance.

With 2 hours before CHVRCHES arrival, we changed the room around, making it long and narrow. This gave us some room for the interview as well as the performance. We then decided to open the large, heavy curtain at the far end. Behind, a glass wall looking into one of Google’s famous cafeterias. A much better backdrop than bright windows or a dark brown drape. One slight complication…the cafeteria was being torn apart.

With time running short to get the performance area cabled up, we decided to take the risk. Better seeing construction workers that something that looked like it was shot at grandma’s. We use DSLRs, so I knew the focus would fall off and the background would be rather abstract. Ofcourse, as soon as we started, a construction worker moved a giant fan right behind our prime camera. Check it out!

We broke this shoot into two pieces to handle CHVRCHES requirements…which were minimal and easy. CHVRCHES were very professional, very low maintenance and sounded great. Our traditional Google setup handled the interview with Lauren Mayberry. We then used a second Yamaha OC2 board for the band mix as well as a monitor wedges and all the needed mics. We also used 4 cameras instead of the usual 2.

CHVRCHES, you guys were great. We hope we did ok for you.

The house was packed…overpacked. It was a “sitting-in-my-lap-room-only” crowd. Check it out in the video. But now, they get to see. Crank it up! Their iTunes lists is here.