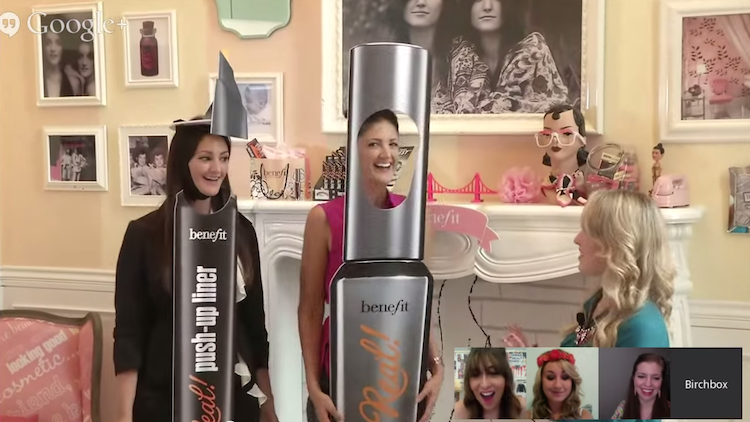 We’ve worked with Benefit Cosmetics before. Who would not want to work with a company whose tagline is “laughter is the best cosmetic.” Sure they take the job seriously, but getting there is never a chore.

Our first outing with Benefit was on Valentines Day. A real-time marketing push with 100 videos shot and uploaded in 90 minutes. Hunky angels responded to tweets using the #BeMineBoost hashtag. Shot in our Studio 3, topless guys wearing angel wings and props scattered everywhere was the rule of the day.  Here is an example.

Live from the 20th Floor

This time, it was a Google Hangout with Benefit and their retail partner Birchbox. The goal this time to produce an authentic, informal Google Hangout, without the bad video and audio. The location was perfect, Benefit’s HQ lobby in downtown San Francisco. It was MediaOne’s job to produce the visual experience in a professional way without it looking like an over-produced extravaganza. To quote Dr Evil, “bring it down a notch”.

To keep with the organic feel, we went with one main camera, and staying on the one main camera except during the eyeliner demo. Zooming all the way in and out of someone’s eye can get rather nauseating. The second camera was used sparingly. We also excluded any onscreen graphics.

MediaOne’s Manager of Studios “JimmyG” Giliberti did the technical like this:

Overall goal of the shoot was to create a fantastic picture and crisp audio of the team at Benefit Cosmetics HQ while keeping it “casual” and not “Over Produced”.  Capturing multi-camera audio and video is the Tricaster’s forte, so we connected the two Panasonics using SDI. One was used to capture the main master shot, and the other was primarily setup and used for capturing extreme facial closeups of makeup application.  The board mixed audio from the Lav’s were combined with the video in the Tricaster, where the main program was also switched.  The ‘program out’ was sent across SDI as 720p to a Thunderbolt BlackMagic MiniRecorder and used as the video and audio input to the Google Hangout on Air using the Hangout’s settings option.  The MacBookPro used as distribution host was used on set as a confidence feed for the talent to communicate with 3 Bloggers also participating in the call.   The set was externally lit with daylight streaming through large windows , while the Flowlight was used as a fill light on the talent, and the Fresnel used for lighting the closeup shots.

Our friends at Benefit seemed pretty happy, judging by the TCHO chocolate that arrived. Over 1,200 viewers and more than 35 YouTube likes means this one was a success.