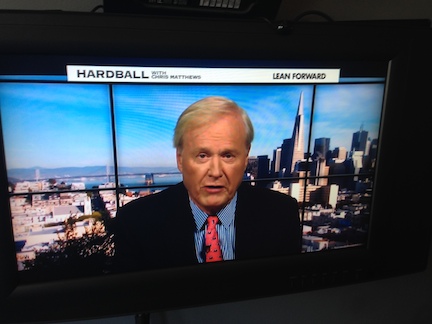 When Chris and Tina, his Producer, arrive, we give them office space (usually a conference room) phones, a television, a printer and we let them be.About 3 or 4 times a year, MSNBC’s Chris Matthews takes  “Hardball” on the road. To San Francisco and to MediaOne.

In the past, shot “Hardball” in our full size studio, with a full crew. On one visit, the large studio was booked so we moved Chris into one of our news insert studios. We had just upgraded the usually sparse studio with a desk, computer and a prompter monitor for another show. Chris loved it. So we made it his home away from home.

The view Chris has.

How the day goes:

Tina comes in early and Chris arrives shortly after. Throughout the day, the show is assembled over Macbook Airs, the intertubes and some conference calls. Tina, Chris and the New York team do an amazing job assembling a 60 minute show, every day. Meanwhile, in Studio 2, our amazing team start checkout at about 12 noon. Even though the studio is normally used multiple times a day, we check out all the phone lines and the incoming and outgoing feeds.

Teleprompter is fed to us from New York via The Switch fiber. NBC also sends us the 30 Rock control room output via satellite  so Chris can see his guests and our camera op can make sure his framing is ok with the graphics. We feed our camera and Chris’ mic out one of our Switch fiber lines and we use another phone line for a “hot mic” that allows the teleprompter operator in New York to hear Chris directly. Everyone here is also on headsets with the New York control room.

Chris wanted to be on our wall. We made it happen.

At about 1PM, New York joins us and we test out everything with them. From time to time, we may also pre-tape a segment in this slot.

Meanwhile, Chris goes into makeup and then heads over to Studio 2, getting in the chair about 10 minutes before showtime at 2PM. We “plug him in” (mic and IFB) and New York takes over. If Chris has a guest, we fire up another studio and send that back to New York as a completely separate feed. That’s always pretty interesting. Two people talking a few yards apart, but the conversation first crosses the country a few times.

Throughout the show, Chris talks to the New York Producer, the New York Director talks to us. The show is adjusted for content and time as we go along. It is literally “created” in real time. Once the show is done, we hang out on standby in case something happens (it’s a news channel). We’ll go live if needed. If not, it’s pizza time.